Green Cross Australia is a not for profit organisation who deliver digital projects that help people in practical ways adapt to our changing climate, embrace sustainable living and build resilient communities. Find out about our other projects…

Those sultanas in your lunchbox where invented around 4000 years ago, when the sun's rays were first put to work, drying and preserving fruit.

Technology has come a long way since then, but there is a very low tech revolution happening in poorer countries, using plastic soft-drink bottles to bring light into people's homes.

Take a look at the life-changing, softdrink bottle in this video.

There are already seven Solar Cities around Australia trialling new ways of supplying power to cities.

Click on each city above to watch a short video about each city and check out the video on the right to see some cool solar inventions from students in Central Victoria Solar City!

Some people think solar power could be the best way to provide electricity to the 1.3 billion people around the world who don't have any.

Here's Mark Kragh (a solar panel recycler) who lives in England and is travelling to Kenya in Africa this year to show local people how to make their own solar panel, big enough to charge a mobile phone, from scrap!

At the other extreme, there are new, very high tech discoveries being made.

The big solar panels you see on roofs now could be replaced with light weight solar cells that can be used on building walls, cars, even handbags and clothing. These solar cells can be printed - just like printing a newspaper!

In this podcast with Dr Jacek Jasieniak from CSIRO Materials Science and Engineering explains the possibilities of printable lasers research including light panels, roll up televisions and the production of printable solar panels.

You can read more about energy efficient design in Pearson Science 8: 5.3.

NASA is really interested in solar panel technology because it would allow spacecraft to travel through the solar system using very little fuel.  Have a look at this amazing NASA solar airplane being trialled.

Here's a great story from National Geographic about collecting solar energy in space and sending it back to earth.  No need to worry about losing access to the sun at night-time, in winter or on cloudy days...

Have a look at how solar panels work.

Here's the solar array in action at the University of Queensland.

On a much smaller scale, the Solar Kindle was launched in January this year.

It has a light-weight, flexible solar panel built into the cover to power a kindle e-reader.

The solar panel gives almost three days of usage for each hour of charging.

Charging time will vary depending on the intensity of available sunlight but it does continue to charge even in the shade.

Hmmm... where else could we deploy this technology?

CSIRO is researching solar technologies and finding smarter ways to generate electricity and distribute it to our homes, factories and businesses.

One such way is a new solar thermal field.

Most solar thermal power stations require water to operate a steam turbine; CSIRO's Solar Brayton technology does not need water. This technology would suit many parts of Australia and the world where it doesn't rain very much.

To check out how this technology works and to find out more about CSIRO's solar research facility you can listen to the podcast by clicking the link above.

Also, watch the video from The Future Makers to see a solar thermal power plant in action near Muswellbrook, New South Wales.

Queensland and New South Wales will have two of the largest solar power stations in the world, with work starting this year and both plants due to be finished by the end of 2015.

CSIRO predicts that by 2050 around 30 per cent of Australia's energy supply will come from solar power.

This is the name of a new paint that converts sunlight to energy!

It's possible the next time you paint your house, the walls of your home could collect energy from the sun and power up the place by generating electricity to run lights and appliances.

Just one coat of the paint, using normal painting equipment will cover the walls with tiny particles, or nanoparticles, to do the work.

Take a look at this science journal to read all about the technical stuff - you may want to read it with an adult or a friend to help you.

What have we been waiting for?

The cost of manufacturing the solar panels has been a major hurdle for solar energy in the past.

Governments around the world have helped their citizens invest in solar panels for their homes in the last couple of years.  Because the factories are making more, they are happy to do them at a cheaper price.  This has made solar usage increase significantly in the past year.

In Australia, the Clean Energy Council reported almost $4 billion was spent installing household solar power last year - an increase of more than 60 per cent than the year before.

Cloudy and rainy weather have been difficulties for solar, and the obvious problem is what happens at night-time, when we need the most energy?

But, there are some clever people in the world… like YOU Future Sparks!

We already have technology to help store energy - that's what batteries do.  But there is room for improvement.

Transporting energy has been a tricky problem for the clean energy industry.  Energy is lost as it moves along power lines, so it has put people off the idea of collecting energy in the central Australian deserts and trying to deliver it to the people living along the coast.

Take a look at how the power grid works. 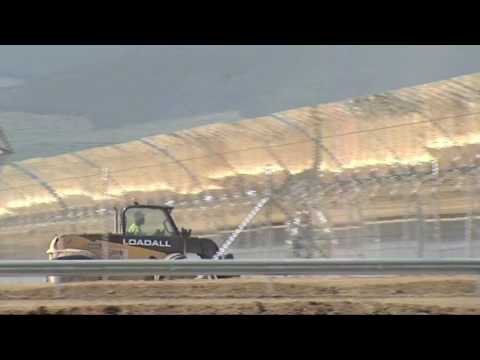 Countries in North Africa are planning to harvest the sun's energy from the vast deserts that make up most of the countryside, including the Sahara, and send it underwater to Europe.

Take a look at this enormous and completely awesome idea.

Solar: A no brainer for Australia

Australia is a big, hot continent with the highest average solar radiation per square metre of any continent in the world.

How do you think this could work in your community? Put your ideas in a video.

If you'd like to know more about creative uses of solar technology, have a look at the links to the right.

Also, find out about Australia's cutting edge research in photo voltaic solar cells in the video to the right.

We asked Australian students to make a video or convince us in writing about their BIG ideas for a sustainable energy future.

Check out the fantastic videos we received, all about sustainable energy solutions!

VIEW THE GALLERY OF ENTRIES

Find out more
Help the planet Become a future spark!